Whirl - They Could Have Been Bigger Than The Bootles. 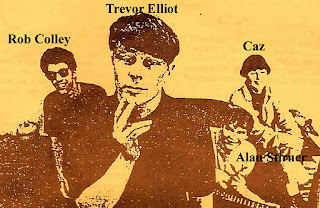 In a bit of a departure from the usual way I've posted stuff up here, I've decided to post up everything I have from a band. Mainly because they are virtually lost or, at best, exist as a footnote in the history of other bands. Whirl were my favourite local band from the time I lived in Brighton, and this is as much material as I can gather together. Ironically, the two singles were released when I had escaped to northern climes so I have no real idea how they went down. If you like what you hear, there's a live performance available at the Fruitier Than Thou blog. (You might also recognise the graphic from above ... I hope he doesn't mind...)

So, Whirl. A band who loved Television, Hurrah!, The Beatles and The Go-Betweens, a band whose 'intro' music was Nancy Sinatra's Bond Theme, You Only Live Twice, a band who provided future members for Blow-Up, The Wolfhounds and Eusebio. What we have here are nine demo tracks - recorded at different times, I believe, but can't say for sure - that were recorded for me by Trevor Elliot in 1985, two tracks from a various artist cassette LP released through Especially Yellow fanzine (full tape to follow, but it does have significant quality issues), a 12" release on Playroom Recordings and a 12" release on September Records. I've also included an interview which was written around the time the Playroom Recordings 12" was released. 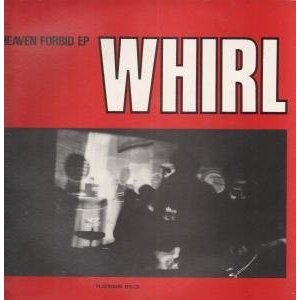 Of the four bands covered in this Brighton section, Whirl are probably the longest running - Trevor explained their history. "Alan and I formed Whirl about four years ago and had various line-ups with different singers to start with, for about a year. Then we kicked a couple of people out and a couple left, then Caz joined on bass while we had Chris Windows on drums temporarily, and finally Rob joined about eight months ago."

They are obviously very pleased with their debut release, "The Heaven Forbid E.P.", "I think it's fucking wonderful, actually," enthused Trevor. "The engineer we worked with at Bloomsbury Studios, Chris, he was really good with us and made us work." I asked if they felt they would be competing with any particular bands, Trevor replied that he didn't think they'd be competing with anyone. "It might compete with certain things, but that's not the point," interjected Caz. "It seems to be the only way you get heard now, bands get heard on Janice Long or John Peel because they've made a single, not because they've sent a demo in. Soon they'll be so overwhelmed by singles..." "You'll have to make a video to get noticed", concluded Trevor.

Knowing Trevor's interest in The Beatles, I asked if there was any particular recording against which he would ultimately like to be measured. "Well obviously I'd say 'Rubber Soul' was probably the best recorded LP ever. The production on it is fucking brilliant - that and 'Revolver'." The tastes of Caz were a little more modern. "I like the sound of people like Josef K. The way we did the single is like that, I think, it just sounds like we're in there - playing." "It was virtually recorded live, we kept everything really simple", concluded Trevor.

Plans beyond the release of the first single currently include playing more gigs outside Brighton, and eventually releasing a second single for Playroom Recordings. Trevor also pointed out that Alan and he are also going to be busy when the Blow-Up single is released in May, as they are to tour during that month and April in order to promote it.

In keeping with the Brighton of the magazine I asked who their favourite Brighton bands were, outside of the bands in which they play. "I haven't really got one," explained Trevor, "I really liked The Milk Sisters lots, but they split. I don't know, I haven't heard a lot of Brighton bands recently." Caz was a little more certain, "I like some of the Iced Bears' stuff. I like The Quentins [10 Million Quentins] because they're different to everyone else."

The subject of which bands Whirl sound like came up. I favoured R.E.M.and early Hurrah!, but Caz thought that R.E.M. were "a bit boring," and Trevor had been told by somebody that "we're like The Monkees on sulphate, which I thought was a quite good description of us, really, don't you think?" Caz had her doubts, "I don't know. I don't think so, I don't think we sound like anyone. A lot of people say, "Well obviously you like 60s music," and I don't really know much about it - it's not one of my favourite things so I don't really pay much attention to it, but if I knew more then I might link it to something like that."

I asked them what they had done during the 70s. "I went to school and I was into Donny Osmond - that, unfortunately, is my history," apologised Caz, "I had a Donny transfer on my pillow - it was horrible". Trevor's past was sadly not as sordid as he "went to school and then left school, and he became something or other and then I was a punk rocker and I was ...me." 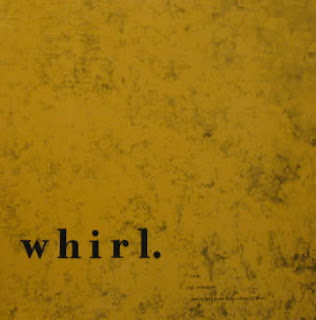