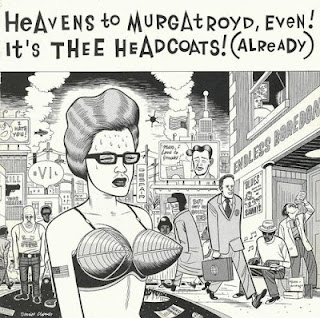 Billy Childish's fourth 'proper band' (preceded by Pop Rivits, Milkshakes, Mighty Caesars) and possibly his most prolific. It was certainly a busy time for the Medway-based Renaissance man with singles being released at wallet-sapping speed from all four corners of the globe. According to their Wiki page, this was their fifth LP release out of around 26. Grunnen Rocks makes it Long Player number four. Not that any of it matters, of course. This was the band's first release on the Sub Pop label and there was even a la-di-da video made for Girl of Matches (actually, it was appropriately-low budget), alongside this specially-commissioned Daniel Clowes cover. It's Billy and the boys at their garage rock finest. This one is for Anonymous. Enjoy. (Oh, and if anybody cares to share the awful dance record made by Steve Fisk which either featured or sampled Mr. Childish please get in touch. I've not heard it since it permanently split my sides one painful day in Eastern Bloc records).