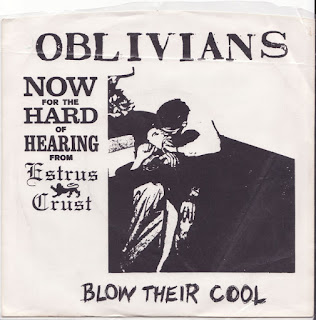 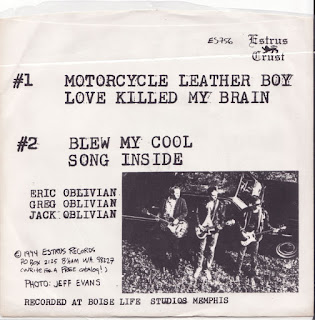 If I were following the script I'd have posted the Captain 9's LP, but I need to have a proper listen to them and decide what I'm going to write. Instead, I've jumped forward to this upload for Phil Gordon. It's topical, anyway. Oblivians have a new record out on In The Red. It's called Desperation and has been in the works for about a billion years, if not more. I suggest you buy it. It's good. Especially the cover of Stephanie McDee's bonkers Zydeco track, Call The Police.

What we have here is the band's Estrus Crust release from 1994. From what I can work out, the songs on this release were never reissued and have never appeared on CD. If that's wrong I'm sure one of you smart-arse fuckers will soon put me right. Coming next, Captain 9's & The Knickerbocker Trio. In the meantime, enjoy.