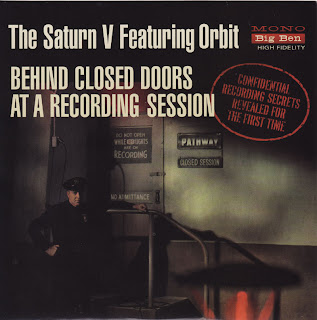 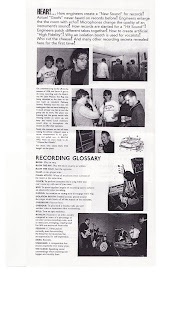 Hey! Hey! Hey! Blogger chums, here's a single by the Saturn V featuring Orbit. Pretty good stuff if you like your rock to be frat, a la Fortune and Maltese. This was one of four 7" singles they released. I'll hopefully share them all with you over the passage of time. The biggest shame about this combo, which featured Johnny Bartlett from The Phantom Surfers and The King of Power Pop, Chris Von Sneidern, along with our titular hero, Orbit (whose real name is lost to the mists of time), is that they never issued a proper vinyl LP. There were two unique CD-released long players from Big Ben Records, as well as a mini-CDR jobby that compiled the singles and was sold at gigs, but no vinyl.

As with all the truly great records, there's plenty for you to read - the insert and the back sleeve are festooned with some of my very favourite words placed in a mind-bogglingly unique sequence. The back cover also features the band posing on what should, going by the thrust of the sleeve notes and the concept of the release, be a street in Swinging London. Except it's not, it's somewhere much more special.

The Saturn V featuring Orbit - Behind Closed Doors At A Recording Studio - Big Ben Records EP BB-500.
Posted by All I Want. at 21:00