The Mummies - Tales From The Crypt (Bootleg LP). 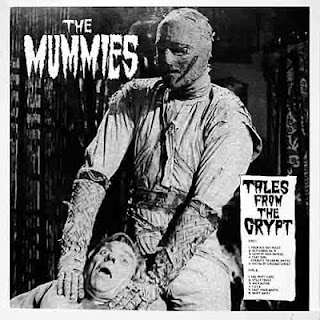 As promised last August (!)  here's Tales From The Crypt, the vinyl bootleg of The Mummies' recording sessions with Mike Mariconda which were meant to make up the band’s debut LP (to be released on Crypt). The story is that The Mummies had wanted Billy Childish to produce but when that proved impossible, for unknown reasons, label boss Tim Warren sent his friend, Mariconda (ex of The Raunch Hands). This didn’t go down well with the band and they weren’t happy with the results. Neither, it seems, was Tim Warren, as he shelved the tapes.

Eventually they leaked. Initially on the Fuck The Mummies CD (a Long Gone John project from which the band never saw any cash) and on this vinyl release (an unofficial Get Hip release from which they did pick up some cash). (For the full story, have a read of Eric Davidson’s garage punk book, We Never Learn).

There’s no doubt that Never Been Caught made a much better debut than this would have done; this is too clean, but it is definitely worth listening to. If there’s enough interest in this, I’ll call a Mad Mummies March event and upload some more of their stuff.