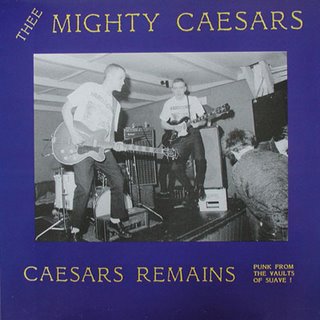 A bit of Billy as we've not had any for a while now. This is one that survived The Great Fund-raising Billy Cull of several years back due to two things; the picture on the sleeve - beer crates, mid-air Caesars and Napalm Death t-shirts, how incongruous can you get? - and the quality of the material contained within said sleeve. It's difficult to argue against the opinion that Thee Mighty Caesars were it where Billy Childish bands are concerned. The die was cast with this band, everything that came after was a retread (Thee Headcoats) or inferior (the 'British Empire' band). Not to say that what came after wasn't worth listening to, more that this feels like a peak. Turn it up. Jump up and down. Enjoy.

Thee Mighty Caesars - Caesars Remains. Hangman Records LP. Hang 46-UP.
Posted by All I Want. at 16:00