McCarthy - Get A Knife Between Your Teeth EP. Midnight Music - Dong 61 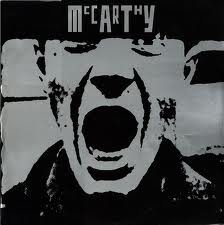 Having already declared my undying, unshakeable love for McCarthy elsewhere on the blog, there's not a lot more to say about them*. There's a bare bones webpage here, which hasn't been updated in a long while,  but has some useful snippets, including a discography with comments from Malcolm Eden. Here's what he had to say about the tracks on this, their final single release. Enjoy.

Get A Knife Between Your Teeth
"The title comes from anti-Bolshevik propaganda. The Bolsheviks were represented by their opponent as rabid barbarians with a knife between their teeth. You can see an example of this propaganda on the cover of our compilation album, That's all very well but. This was an attempt at a dancey number, but I'm not sure it came off. At the time we also recorded a song that sounded like Rick Astley, but it never got released."
Nobody Could Care Less About Your Private Life
"I gradually moved away from a psychological point of view towards a political one. This song sums up this process. I quite like the song because it's slow without being laborious. Originally the drums were there all the way through the song, but during the mix we decided to bring them in half way through, which means the song builds up quite nicely."
With One Eye On Getting Their Pay
"Here's a song I'd completely forgotten about, that I had to play again. We recorded the songs about this time in Midnight Records' studios, and Nick Ralph, Midnight's manager, gave us all the time we wanted. I don't suppose he made much money for his trouble because Midnight went bankrupt a few years later. But anyway we had plenty of time to work on drum and guitar sounds, etc. I think that's why our later songs generally sound better. Plus we were working with Kevin Harris, a producer and engineer who we got on very well with. He was good at getting the sounds we were aiming at. We also started adding keyboards, which is surprising because none of us could play. Here I think I did the solo, which sounds relatively difficult, so I must have had about two hundred stabs at it."

Can The Haves Use Their Brains
" This song is very derivative - a mixture of the Byrds and the Smiths - but still quite pleasant, I think."