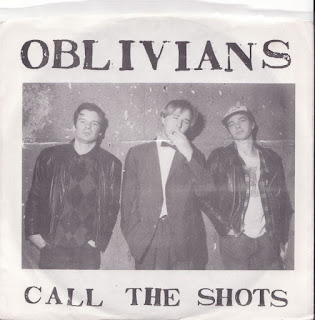 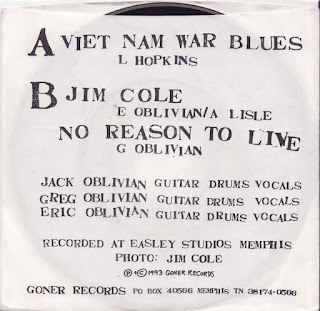 Released before they could afford to add The to their name, this is Oblivians debut vinyl release on Eric Friedl's own Goner Records. They had previously appeared on a split cassette release with fellow Memphis freaks Impala. The Oblivians' tracks from that cassette were later released on Goner LP On The Go, and if anybody could share that I'd be extremely grateful.

As far as I am aware, and please correct me if I'm wrong, these versions of Viet Nam War Blues and Jim Cole are unique to this release. They're both on the Soul Food compilation, but as 'augmented' versions. Viet Nam War Blues has an added piano track and Jim Cole has a subtle wash of organ laid over the original version. They've been George Lucas'd.

I have their Estrus EP lined up for future release and, as far as I can tell, that record also features four 'versions' which have never been reissued or reused in any form. Again, please please please correct me if I'm wrong.

What I really love about this single is the photo of the band. They all look so young and devil-may-care, particularly Mr. Greg Cartwright in his charity shop suit and bow tie. Enjoy.