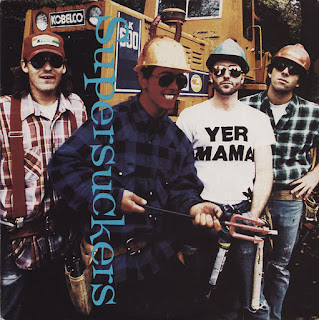 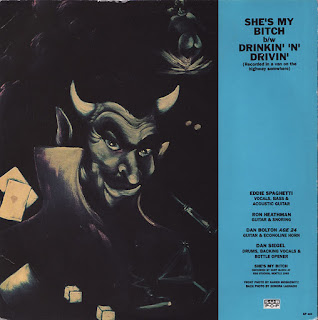 Never ones for subtlety, Supersuckers present their tender side on the A-side of this 1993 release. It's a better, less adorned, more sonically-original version than the one on La Mano Cornuda. The b-side is an acoustic knock-off 'recorded in a van on the highway somewhere'. I'm glad I didn't have to pay for it. Anyhow, in celebration of February 29th, the day 'the gals' are supposed to propose to 'the guys', here's a tender sweet love song. Enjoy. 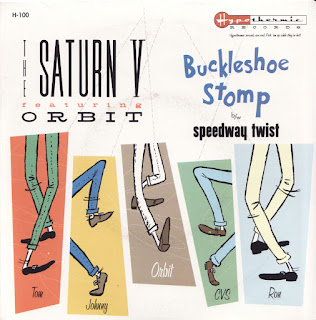 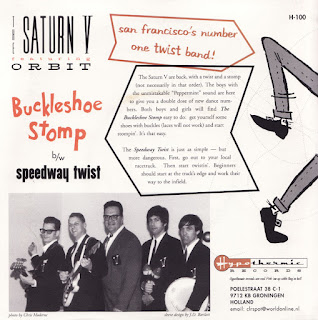 The Saturn V featuring Orbit. Or what Johnny did next. Following his departure from The Phantom Surfers Johnny 'Big Hands' Bartlett needed a new band so assembled this group of garage rock superstars. Orbit, he's the big fella in the middle of the photo above, went to school with Raul Balcarcel from out of The Fingers. It's true. Ron Silva (that's him far right, holding the drum skin) was in The Crawdaddys - the once and future Kings of the Chelsea Boot Stomp. Chris Von Sneidern (CVS) has a third sector organisation named after him in England. And I can't remember if that's Tom Ward or Teenage Rob Douglas on the far left. Rumours of the band's potential reformation have begun to be spread by manager Riff Ryan. Enjoy.

The Saturn V featuring Orbit - Buckleshoe Stomp. Hypothermic Records 7". H-100.
Posted by All I Want. at 23:34 No comments: Links to this post

Southern Culture on the Skids - Come And Get It (Before It Done Gets Cold) Giant Claw 7" GCS-007. 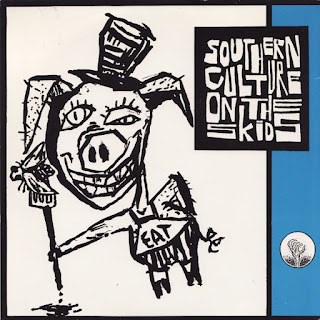 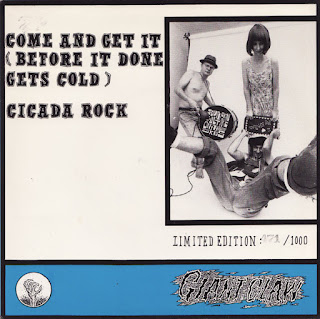 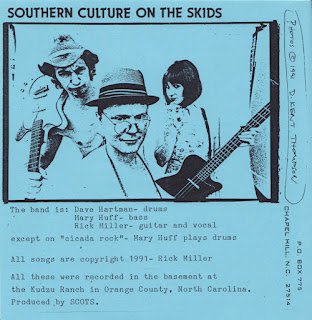 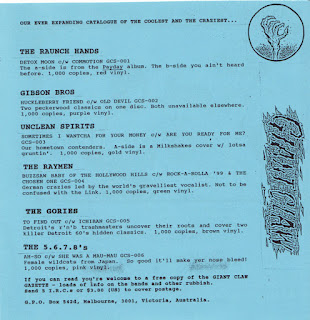 A great release on Australia's Giant Claw records. Southern Culture On The Skids were and are one of those bands who I have be in just the right mood to listen to. When the mood is right they work for me. When it's not they sound 'gimmicky'. Which I know is wrong, but hey, I'm only human. As far as I can recall, this is the only 7" by them that I have left. I even, stupidly, sold the Los Falanas singles they produced in collaboration with Bassholes' Don Howland. I do still have the Peckin' Party 10" and the Telstar-released vinyl version of their Dirt Track Date LP which dates from that odd period when some major label stuff was farmed out to indies for vinyl release. I know it happened with SCOTS and Helmet, I have a suspicion it may have happened also with The Muffs. Anyhow, Southern Culture On The Skids and their shit-kicking sound. Enjoy. 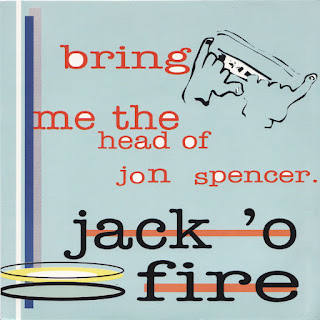 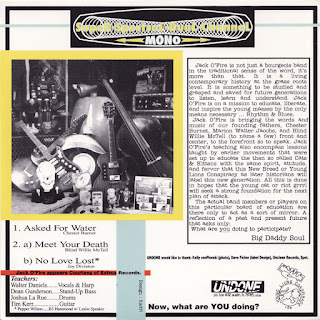 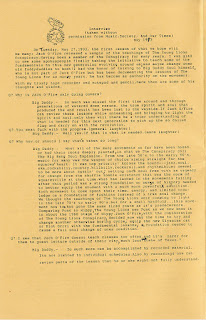 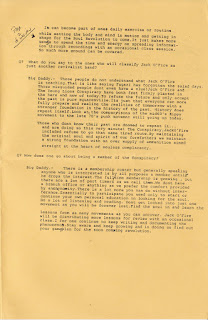 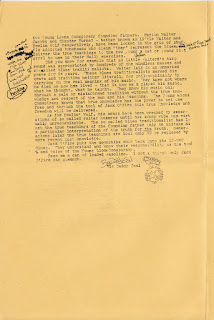 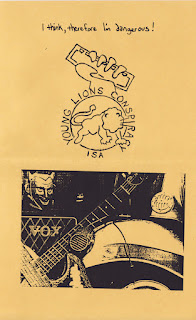 Jack O'Fire (note the ' is in the right place here, unlike on the cover of this record) were a band I found very easy to love. Sure, they were a covers band, but such fantastic covers! On this, their debut release, we have songs made famous by Howling Wolf, Blind Willie McTell and those well-known blues artists Joy Division. No Love Lost was on 'An Ideal For Living', the first release from Joy Division. Download a superb version of it here.

In addition, the whole Young Lions Conspiracy schtick made their early releases doubly entertaining. There were two 'tracts' with this release. As is policy, I've scanned them both. Enjoy. 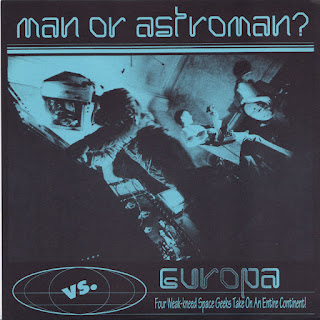 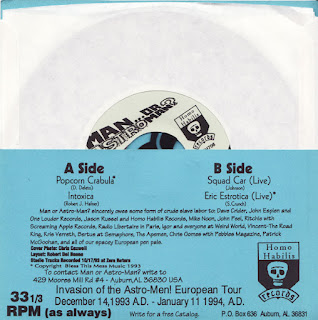 For a band with strong attention to detail and an eye for the gimmick I was always surprised that this was the only time Man... Or Astro-Man? produced a single for tour release. Disappointingly for me I got the postcard informing me of their imminent arrival after they had been and gone. I ended up buying my copy from Estrus mail order. I note the dates of the tour and wonder exactly where they spent Christmas 1993. I hope they were looked after. Enjoy. 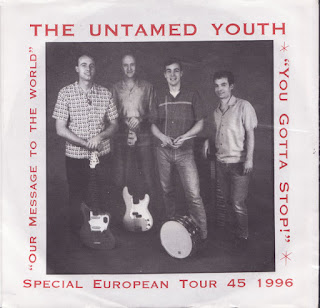 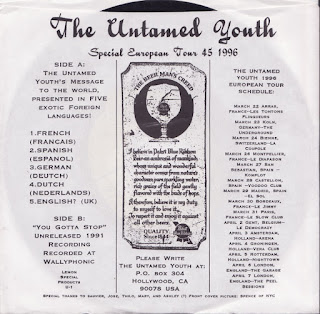 Various Artists - The Phantom Surfers and The Astronauts split single. Pin Up Records 7". PIN UP 94013. 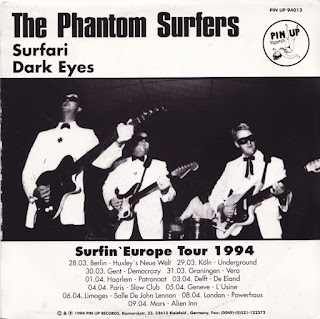 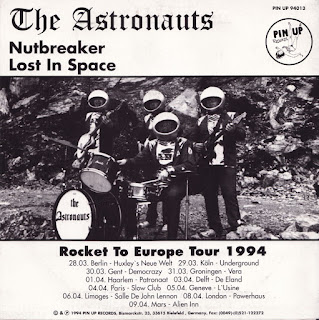 Jesus, where did the time go? I never meant to be away for nearly a month, but real life got in the way. Not in the way of transcribing vinyl, more in the way of sitting down and writing and uploading. It's been a busy time and, frankly, I've not been arsed enough to do stuff. Not now, though. I return, embiggened and there's a lot to share. The next four posts are themed - European Tour singles 'only' available from merchandise stalls during Our Favourite Bands' tours of Yoop. Tonight, it's the turn of The Phantom Surfers and The Astronauts. The former from the United States, the latter from Germany, but they got to play two dates in England so that meant some kind of getting over here vibe for them. Coming up next, in no particular order, The Untamed Youth's Special European Tour 45 1996, Man Or Astroman? vs Europa and The Mummies & Supercharger Tour '93 flexi-disc (from flexi-disc). Enjoy.

Various Artists - The Phantom Surfers and The Astronauts split single. Pin Up Records 7". PIN UP 94013.
Posted by All I Want. at 23:20 1 comment: Links to this post