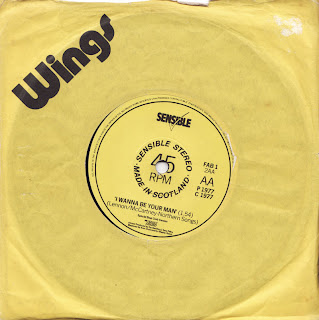 First release from Scotland's estimable Rezillos. Independently released in '77 then reissued with major label backing a couple of years later. I have no idea which version this is, nor do I care as it sounds super duper nevertheless. There is a picture sleeve, but I don't have it. I also think this Wings bag looks better on it. Macca would be so proud. Kisses on the bottom. Dick. A-side is a different version of Can't Stand My Baby from that on Can't Stand The Rezillos. AA-side is a Beatles cover, which must have gone down really well with the No Elvis, No Beatles, No Rolling Stones miseries. Enjoy.