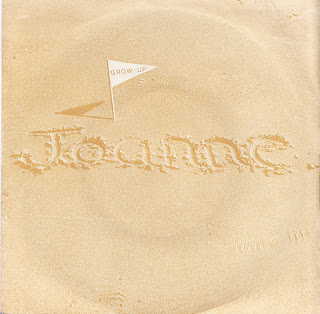 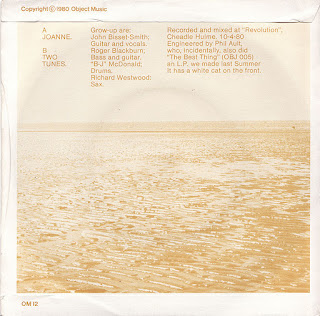 My introduction to Grow-Up was through their debut LP, 'The Best Thing', which was also released on Object Records a few months before this single. 49p from Virgin Records in Manchester when it was at the bottom of Market Street. Cheers, Richard. A few years later when in Brighton and enthusing about the LP it gets assumed that I already had a copy of this. I didn't, but I heard it and I knew that I had to have it. But this was the olden days and finding a record, particularly a limited release, niche market independent 7" from a few years previous, meant you had to actually get off your arse and trawl through record shops new and second-hand as well as rely on huge amounts of luck. And eventually I did. I wish I could remember where, but I just recall that it was just sitting there and it was cheap. And now you can have it too. Sleeve lists tracks as A. Joanne. B. Two Tunes. Label echoes the sleeve for the A, but B is 1a. Affirmation of Existance. 1b. Reaffirmation of Existance. 1c. Swept Away (0.36) 2. GGGDADGADADAD (1.46). Enjoy.