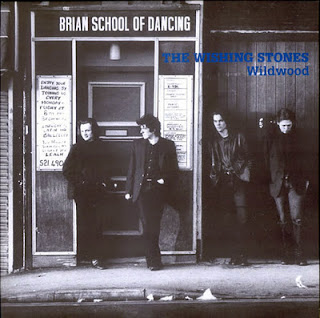 
It's 1988, Caroline Coon's predicted date for the end of the influence of Punk Rock. It's Spring and London, in the full ripened years of Enterprise Culture, sees its youth overdosing on style facism, commodity-buying and credit binges.

Meanwhile, back in the world that never went away, that smoke-infested demi monde of pub backrooms and college bars, a band called THE WISHING STONES are presenting something for the disenfranchised to buy into.

After flirtations within the narrow parameters of 'indie pop' (and several line ups) Wishing Stones mainman Bill Prince was now fronting a blowzy-but-deft rock'n'roll quartet. Wandering into Camden's Falcon pub in April, I witnessed (along with three men and a dog) one of the most searing guitar duels I'd heard since wearing out the grooves on Television's 'Adventure'.

But it wasn't all guitars. Bill Prince is a songwriter in the grand tradition, literate, but never name - droppingly verbose, his lyrics are little paranoid dramas, couched dreamy metaphors, all tossed out with that lugubrious voice - part doom - laden, part starry - eyed and almost innocent.

After two great singles on the Sub Aqua label, the band split on the verge of a major tour. In March '89 I saw their last gig, bombing in front of 100 Spacemen 3 fans at the Notre Dame Hall when a ropey PA and the smell of patchouli oil overcame the miscast quartet. Their parting shot, 'Lost In The Well' was a fitting sayonara.

The album The Wishing Stones had been working on in the Winter of '88 finally saw the light of day on the Heavenly label in 1991. For anyone who ever liked Punk Rock, Neil Young, Television or, erm Paris in the Spring, here's another vital item for your collection.