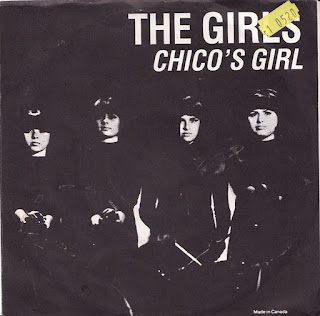 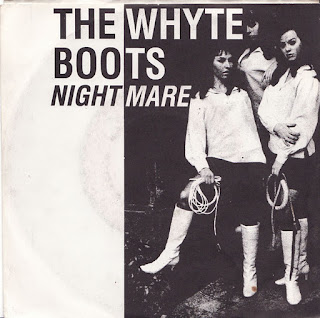 A bit of retro glamour to celebrate the autumnal sunshine that's beaming down this afternoon. Two slices of prime 60s girl band melodrama. Both these tracks were included on the later Girls in the Garage Volume Two LP on Romulan Records, and from the sleeve notes on that I can pass on the following:

The Girls - This California quartet consisted of four sisters: Diane, Sylvia, Rosemary, and Margaret Sandoval. Their two singles for Capitol were outstanding, combining the tricks of the Ronettes and the Shangri-Las, but more garagey. Reportedly they played the clubs awhile with a repertoire based on Stones, Beatles, and original songs. "Chico's Girl" is a Mann-Weil song produced by Steve Douglas (Spector sidekick) which maybe tries a bit too hard for the Shangri-La slut opera style, but is great fun anyway.

The Whyte Boots - Most girl group fans have at least read about this classic record. The group, who set out to be a trashier Shangri-Las, succeeded in waxing the ultimate sleaze-melodrama, owing no little thanks to the production of Pam Sawyer and Lori Burton, who also wrote the song (along with plenty of hits in the '60s, such as 'Ain't Gonna Eat Out My Heart Anymore"). The song can also be found on Lori Burton's fine solo album.

I don't know how common the surname Sandoval is in California, but do wonder if there's any connection between the four Sandoval sisters and shy modern songstress Hope Sandoval. Enjoy.