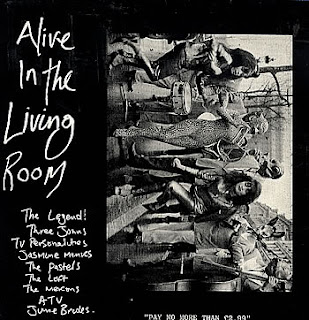 I've had this one squirreled away for a while. I don't know if it ever came out on CD but if it did it would be a completely redundant release given the bootleg quality of the original release. Still, it's Creation Night on BBC Four tonight and there's a clip of The Loft included in it. In addition, on this record you can hear early Creation acts The Legend! (aka journalist Everett 'Jerry' True), The Jasmine Minks and The Pastels, as well as other pre-C86 luminaries The Three Johns, The Television Personalities, The Mekons, ATV and God's Own Band, The June Brides. Enjoy.

Various Artists - Alive In The Living Room. Creation Records LP.
Posted by All I Want. at 20:28