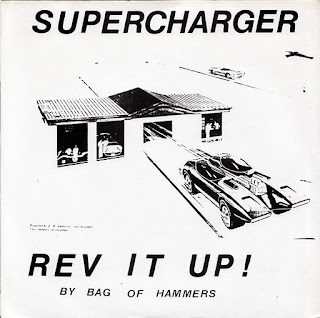 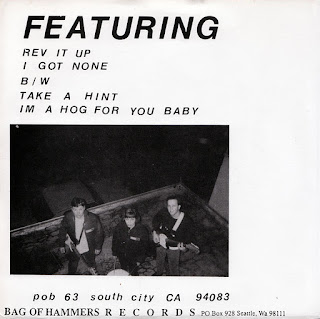 The oddest thing about Supercharger is how few singles they released. In my head they are a 'singles' band, but they only released three singles before they split up. This one, their debut on Pre B.S. and the promo 7" that was available from various select sources when their second LP was issued by Estrus. There were an additional three releases which were split between the 'charger and other, less superior, acts. Sadly, one of these was not the Supercharger/Fingers split which was 'announced' on the label of the band's first single.

As with the Whirl! post, here's a contemporary interview with the band, from long-gone garage site Furball, taken by them from even longer-gone print fanzine Moral Sense.

Rev it up and go with... Supercharger.

It all seemed simplicity in itself. One of Furball's most trusted Gentleman Agents had found himself taking a break in the fair German city of Berlin. After he had unpacked his shooting stick and plus fours he found that two of the New World's finest Garage Punk bands, Supercharger and The Mummies, were entertaining the troops at the oddly-named Knaap Club. Putting through a call to headquarters he requested whether an interview with these American entertainers might be in order. We readily agreed and drank a toast to him with the finest matured Highland whisky that very night. It was here that things began to go rather awry.

"HEY FURBALL. THIS IS GREG OF SUPERCHARGER. YOU GUYS NEED TO GET ONE THING STRAIGHT, I AM RIP OFF RECORDS, NOT DARIN, I PLAY BASS, NOT DARIN. AND ALL THE ANSWERS THAT YOU TRANSCRIBED AND CREDITED TO DARIN, ARE ACTUALLY ME, AND VICE VERSA. YOU GUYS FUCKED UP BIG TIME.

Needless to say, when we received that response from Mr. Greg Lowery, bass guitarist for Supercharger, and the man behind Rip Off Records, we were mightily shamed. Suspicious that Gentleman Agent JW001's answers were a tad on the brief side we had sent a radio-telegram to the United States of America in the hope of receiving more information. What we didn't expect was confirmation that this Gentleman Agent had 'slacked out', neglecting his claret and cigars for a sordid entanglement with the tawdry narcotics of the stinking hippy crash-pad scene.

Furthermore, the whole world had gone into a state of Post Traumatic Stress Syndrome with the news that The Mummies' apparent reformation for a tour of the spas of Europe had only been for what was understood to be a skipful of bandages and rather a lot of liniment, if one knows what one means, after which they were all due back at their ancestral tombs. In the meantime, a second LP now under their belts, Supercharger imploded.

"IN REGARDS TO THE BREAKUP, WELL IT IS LONG AND COMPLEX, BUT I WILL TRY. THERE ARE SEVERAL REASONS FOR US BREAKING UP, THE FIRST WAS DARIN'S RELUCTANCE TO PLAY LIVE, AND HIM BASICALLY DESPISING JUST ABOUT EVERYONE WHO SAID THEY WERE FANS, THINKING THEY WERE JUST SAYING THAT TO JUMP ON THE BANDWAGON. HE ALSO WANTED TO BREAK UP THE BAND ALMOST FROM THE BEGINNING, SAYING WE WERE A JOKE AND ALL. BUT THE FINAL NAIL IN THE COFFIN WAS DARIN ACTING LIKE A TOTAL ASSHOLE OVER IN EUROPE, TRYING TO SHOW OFF IN FRONT OF THE MUMMIES AND ALL. SO THAT WAS THAT. I KNEW HE WANTED TO BREAK IT UP, AND THIS WAS HIS WAY OF MAKING SURE IT WAS DONE. SO THAT'S THE STORY. IN REGARDS TO YOUR OTHER QUESTION IF WE STILL TALK TO EACH OTHER, ME AND KAREN DO OBVIOUSLY, DARIN AND KAREN ARE STILL FRIENDS, BUT I TOTALLY DESPISE DARIN FOR WHAT HE HAS DONE TO OUR BAND, AND OUR FRIENDSHIP, SO FUCK HIM".

So, let this interview stand as an epitaph for Supercharger. Let those who come after take heed - Supercharger rocked. They rocked shabbily, but they fuckin' rocked.

"IN REGARDS TO THE FIRST ALBUM, WE RECORDED IT WITHOUT EVER PLAYING LIVE OR BEING INVOLVED IN ANY SCENE. ME AND DARIN STARTED THE BAND, AND NEEDED A DRUMMER IN JANUARY 1991. SO WE ASKED KAREN, WHO WAS/IS (Furnote: ISN'T) MY GIRLFRIEND. (GREG, NOT DARIN). SHE NEVER THOUGHT ABOUT IT, BUT SHE CAME TO PLAY A COUPLE OF TIMES AND LIKED IT, TOOK A MONTH'S WORTH OF LESSONS, AND AFTER A MONTH WE STARTED RECORDING THE FIRST LP. DARIN AND MYSELF WERE PLAYING FOR ONLY A COUPLE OF MONTH'S BEFORE".

Gentleman Agent JW001's questions and answers begin here, any clues as to his whereabouts would be appreciated - he was last seen hitting the Hippy Trail to go 'find himself' in one of those places where nice white boys go.

Do you get out of Daly City often?

"We play San Francisco about once a month - every six weeks - any more would be like tonight, y'know, audience totally bored", said Greg.

So do you have dayjobs then?

"Karen is a drug-runner - she smuggles drugs in children's diapers".

So where did you come up with the name Supercharger?

"Well", whined Darin, "I wanted to be called The Superchargers, but was outvoted by Greg and Karen. Greg said 'Supercharger'".

Furball later ascertained that a Supercharger is kind of like our very own Hot Wheels racing track, and is also part of a horseless carriage. What would these mechanically minded young folk be getting up to once they got back to the land of Mom's Apple Pie?

"Well, I'm kind of excited 'cos my new label should be just about ready to go", gushed Greg, "I'll be home in about two weeks, and should be putting out a one-sided 7" by The Statics soon after".

As this was a double-headed tour with The Mummies, it had to be asked whether Supercharger, too, hated CDs?

"Yeah, well", decided Greg, "we don't hate them that much. I used to have one, but I don't like 'em anymore. The real beauty of vinyl is the hunting for something really rare and just holding it in your hands. You don't get that with CDs".

Are there any bands out there who deserve The Supercharger Seal of Approval in the same way that The Mummies championed yourselves and The Fingers for a while?

"No!! It's the other way around", snorted Greg, "too many bands getting the attention they don't deserve. I see a lot of bands, and the majority of them suck. It's not like I'm saying we don't but I just don't like it".

It appears you don't like much, so who do you hate?

Provoked by this I leapt on the path of low-rent cheap and sleazy journalism by asking them who their favourite fuck was.

"Well I could bet in trouble for this", said Darin, "so I'd better say Danielle". (Pimm, of Trashwomen, Brentwoods and Bobby Teens fame).

"Actually, she was my favourite too", interrupted Darin, "probably yours, too".

So, besides Karen reading this, what's your biggest fear?

"Oh, I dunno, probably running out of money in Germany", decided Darin.

"Yeah", grinned Greg, "an earthquake happens and a bridge falls. That's my biggest fear, and it's already happened".

Did the split single with The Fingers ever happen?

Oh, okay, then you don't mind me asking about another band? What's Raul Balcarcel from The Fingers up to?

Right then, you are a punk rock band. If it came to a fight between you and The Mummies, who would win?

"Well, there's four of them and only three of us, but I guess Karen could take on two of them, which would kind of even things out", decided Darin.

So, would you win?

"The Mummies would", he concluded.

"No way, I can't see it happening", disagreed Darin.

Have you any message for your legions of UK fans who were denied a visit?

"HAHAHA! What fans?", asked Greg, "I'd have to say buy some real records and then you wouldn't have to like us".

And finally, your thoughts for the day, gentlemen?

"I guess I just want to shit on the ledge", snickered Darin in reference to the great German plumbing system which forces you to savour your load before flushing.

"I'd just like to say that Germany sucks and Berlin is the ugliest city I've ever been in".