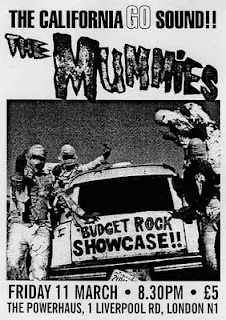 I found this tape over the weekend. It dates from when The Euro Mummies Mark II came over to Europe and played a bunch of shows. Amazingly enough they even got over La Manche to play two dates in London. I was lucky enough to be at both. This was from the first night. I was spectacularly drunk and, as you'll hear, had the tape recorder in my pocket for the first few songs. The sound improves (it never gets above 'really, really shitty') when I remember to get it out but it's amazingly hissy. And I don't know how to fix it or even if it's worth fixing. The band, Larry Winther in particular, are having a running feud with the venue's security, something they carried on into the following night's show at The Frat Shack. Anyhow, it ends suddenly, as you'll hear, at the point where I'm dancing enthusiastically, swinging my arms around with the recorder in my sweaty hand when voop_______________________________________! It flies out and crashes to the ground. I won't be sharing it with the Techlords at Dime A Dozen. Enjoy.