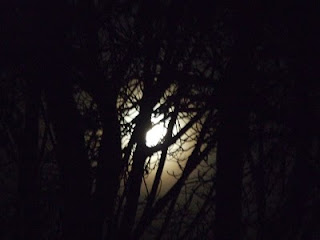 No image for this one as flexi-discs don't scan very well. Instead, here's a picture of last night's 'Super Moon' emerging from behind the trees. This flexi came free with a split issue of Highball Magazine and Monsters International. I no longer own the magazine. At least one of the tracks on here has, as far as I know, never been reissued - the cover of Joe South's Creature In The Surfers Lagoon.

While I was trying to find out more about this release I found this tremendous blog cataloguing all the vinyl output of Man Or Astro-Man? More importantly, I found out that current Man Or Astro-Man? operative Victor Vector fell ill with pneumonia and was hospitalised, very seriously ill, at the end of the band's last tour. Like most musicians working at grass roots level, Victor does not have health insurance so an appeal has been set up to raise funds for him. I would ask that if you have been enjoying this blog, the Man Or Astro-Man? stuff in particular (and there is plenty more to come), you go to the band's Facebook page and follow the link to donate towards his medical fees via Paypal.

Man Or Astro-Man? - Creatue Feature Flexi-disc. Kronophonic Records SEXI FLEXI 002.
Posted by All I Want. at 10:31