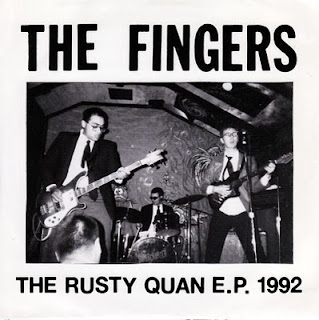 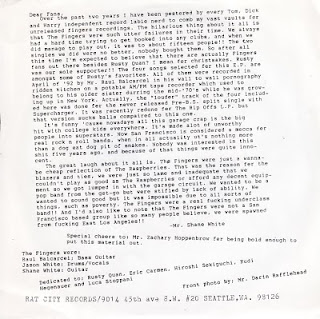 Four more tracks by The Fingers. This is another post-split up release and features material recorded by Mr. Raul Balcarcel on a boom box. Allegedly. What's In It For Me? was meant to be The Fingers track on the announced but never released Pre-BS Fingers/Supercharger split single. It was also later recorded by The Rip-Offs, but, as Mr. Shane White indicates in his comprehensive and learned sleeve notes, "that version sucks balls compaired (sic) to this one."

Email ThisBlogThis!Share to TwitterShare to FacebookShare to Pinterest
Labels: garage, pop, Rat City Records, The Fingers, The Rip-Offs, The Statics