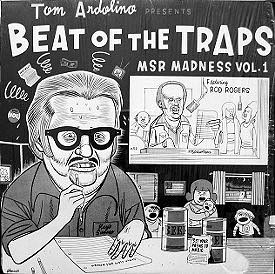 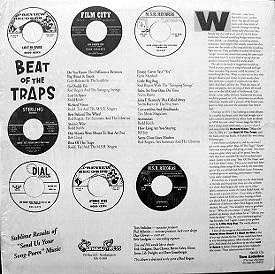 A slight swerve here, and and LP some of you may have heard before. Or you may have heard the cover versions of songs on it as performed by The Jon Spencer Blues Explosion (Beat of the Traps) or Bassholes (Little Rug Bug). It's an LP of songs ... actually, I've tuftied the LP sleeves above from a Blues Explosion website, so I may as well go the whole hog and appropriate their transcription of the sleeve notes in order to give you a proper idea of what this record IS ALL ABOUT.

The small print above:
"Wild music; crazy lyrics. Beautiful music; perfect lyrics. You get all this and more with these kinds of records. Strange sounding cheap early electronic keyboards like the Mellotron; out of control drum machines. Normal-sounding budget session musicians; drunk -- or something -- sounding session musicians. And singers who usually sound like they never saw the words to the song until the recording light was on. They probably recorded 50 of these "songs" in one day, sometimes using the same track more than once. It is this kind of set-up that can produce innocently beautiful works of art.

The ads in the back of magazines would say "Send us your poems or song lyrics and we'll get them recorded. Big money could be yours!," or some such come-on. What it turns out to be is that you pay them to put music to your words, then they send you a couple of copies of it on their label. And that's all they do. There are many of these companies, but the king of them all would have to be the MSR label of Hollywood, California -- now, sadly, defunct. Sometimes the song would be pressed on a 45, sometimes on an album collection, maybe with a picture of the house composer to help convince the customer that they're legit.

One day in 1971 I was looking at some albums in a surplus hardware store that had bought out a radio station's record library when I saw an album on MSR Records called Variety Songs For '69. It had a cheap stock cover with a big musical staff and song titles like "Richard Nixon," "More On Ode To Billy Jo," and "Beat Of The Traps," and the back cover was blank. It looked like something I'd better get.

I went home and played it, and by the time I got to the song called "Beat Of The Traps" I knew there was something wild going on here. Not every song was great (they can't all be gems), but the ones that were sounded like they'd reached outer space. Listen to the song "Beat Of The Traps" and you'll see what I mean. These guys must have been recording these songs all day and by the time they got to this cut all hell had broken loose. Everyone involved gives an amazing performance -- these lyrics really inspired them.

From then on, I would look out for these kinds of records and found that there are a lot of them out there. Rod Rogers also turns up on other labels, sometimes under the name Rodd Keith. I'd like to see a picture of him. Once while in Hollywood I called the MSR number, hoping to find out about Rod. A guy answered the phone and I asked him if he knew where Rod Rogers could be reached. He said, "You wouldn't want to go where he is." "What do you mean?," I asked. "He's pushin' up daisies, that's where he is." "Oh no, you mean he died?" "Yep. He was a keyboard genius," was his reply. And I agree. Listen to his perfect track for "Little Rug Bug." The words about a baby are great, too.

I love all the songs on this collection. "Our Hearts Were Meant To Beat As One" is one of my top choices for the "if you could have been at any recording session, what would it be" category. And check the punchline to see what "Lost In Space" is about. From great lyrics, indescribable music. These selections have them all.

Apollo Up,
-- Tom Ardolino (the man who beats the traps for NRBQ)"

Various Artists - Tom Andolino presents Beat of the Traps. MSR Madness Vol. 1.
Posted by All I Want. at 23:26