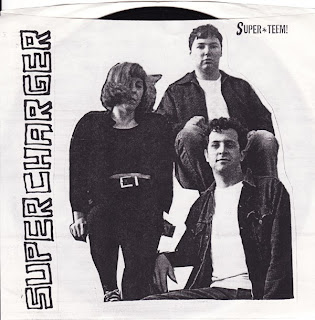 Ah, Supercharger. How many ways do I love you? This single was issued on Darin Rafaelli's own Super*Teem records after the band had split up. It is in no way essential Supercharger. Main track, Sooprize Package for Mr. Mineo comes from Supercharger's self-titled debut LP, but is more famous (ha ha) for having been covered by The Mummies for Fuck CDs, It's The Mummies on Hangman and Never Been Caught on Telstar. The b-side is South City Psycho and this appears to be the only time it was released. Which is understandable as it is very much minor Supercharger.