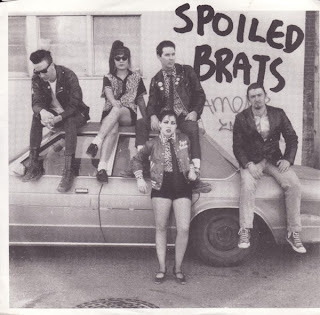 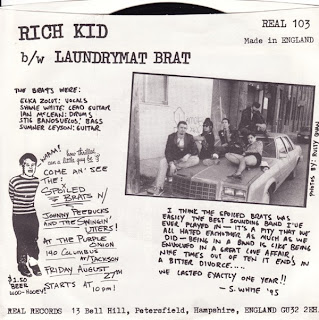 The Spoiled Brats were yet another amalgamation from the limited gene pool that coughed up most of the budget rock / garage scene in the early 1990s. So, here we have Elka Zolot fresh from or on her way to The Trashwomen, The Count Backwurds and The Spastics, alongside Shane White whose career could only head down after The Fingers split up. In the meantime he pouted meanly on behalf of The Rip-Offs, The Infections, The Tight Fits, The Loose Lips and The Bearded Tits. This is a great single, managing to get that shitty Brentwoods vocal sound nailed to the meatiness of The Rip-Offs. It came free with Sooprize Package magazine which was run by a great fella down on the south coast whose name I have, rather embarassingly, forgotten. So, sorry Tarquin Lunchbox, or whatever your name was, but thanks for the finest of the two singles (not including the MRR split) that The Spoiled Brats put out. And I hope that when you put 'Laundrymat Brat' as the flip you were just following orders.

Email ThisBlogThis!Share to TwitterShare to FacebookShare to Pinterest
Labels: budget rock, spoiled brats, The Brentwoods, The Fingers, The Trashwomen