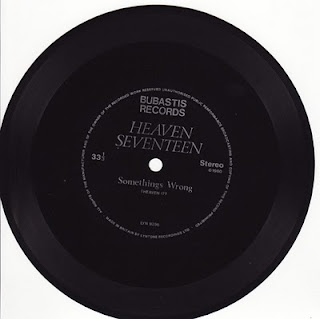 No, not that Heaven Seventeen. This one precedes the Human League spin-off, but was, interestingly, also from Yorkshire. Bradford, as opposed to Heaven Seventeen's Sheffield. Adding more White Rosery Hosiery into the mix, I got this from Red Rhino Records in York. It apparently came with issue twelve of Wool City Rocker fanzine, a magazine I don't remember buying, but could well have done so given that I was interested in a lot of bands from that area at the time. I believe I also bought I'm So Hollow's 'Dreams That Fill The Vacuum' single that day having heard it on Peel.

As far as I know nothing else was ever heard from this version of Heaven Seventeen. They got into a spat with the Virgin-backed Heaven 17 and that was that. Gone. This one-track flexi is a real treat and very, very Buzzcocks-influenced, but with that pharp pharp cheap keyboard sound so prevalent in the day.

Heaven Seventeen - Something's Wrong. Bubastis Records flexi-disc.
Posted by All I Want. at 20:40